In trying to come up with a monthly blog I sometimes go through and explore old journal entries I may have made about pole or fitness.  A couple weeks ago there was a major controversy over this move when one of the titans of the pole industry publically came out on Facebook as hating the move and thinking it ugly.  Two things come to mind of course: “to each their own.” But really and more relevant to this situation: “if you can’t say something nice, keep your mouth shut.” I don’t know what she was thinking with the post in the first place, she even stuck to her guns when the originator of the move jumped in the thread to say she didn’t appreciate the comments. Ultimately she took it down which to me is cowardly though also the only course of action she could have taken. It shouldn’t have been put up in the first place.  It was irresponsible at best and just catty-mean girl jealousy at worst.  Irresponsible because as a leader in the pole community starting a fight with another leader in the community makes the stigma surrounding pole seem more legitimate. If it doesn’t make the pole community look good, it makes it look bad.

Love or hate the move it undeniably changed the pole world forever.  It is one of the hardest moves and [please someone feel free to jump in the comments section and correct me if I am wrong but] it took at least 3 months before anyone else came out with video/pics of themselves in the move.  There is no other move that took that long for another dancer to imitate.

I first saw a picture of Felix Cane in the spatchcock in August of 2008.  Deb Riley posted a myspace update that said “flipping out over Felix’s latest move WTF”.  So I went to her page to see what the possible latest move could be and found out exactly what it was. I, like almost everyone else who saw it for the first time, was blown away.  At first glance it looks like an over middle split.  If you look at it more closely you will see it is not but in fact a pancake stretch. To get the overstretch use yoga blocks. I knew what to do to train for it but had no idea how to get into the position. I hadn’t seen the videos yet from the competition so I had no idea once I got flexible enough how I was even going to get into it.  But I didn’t care.  I started stretching for it right away.  I could straddle and put my chest to the floor in straddle.  I was on my way.  Next I bought yoga blocks and put them under my feet.  Oh, it was so much harder to get chest to floor now!  Whoa!  I felt like I was half way there but still had such a long way to go.  It took months of stretching with my single blocks to get a flat back down to the floor.  Once I did, I wasn't ready to raise the block up yet with another block or just turning it on it’s side to give more height so I moved the blocks to under my calves.  This brought my feet a little further off the ground but not as far as it would be if I had two blocks.  I gradually moved the blocks until they were under my knee.  By then it was time to buy a second set of blocks and use two under each foot.  The back bump was terrible.  It took at least another six months to get my back\chest flat on the floor.   It may have even been a year.  Sometimes I would use three chairs and the blocks and make gravity work for me. 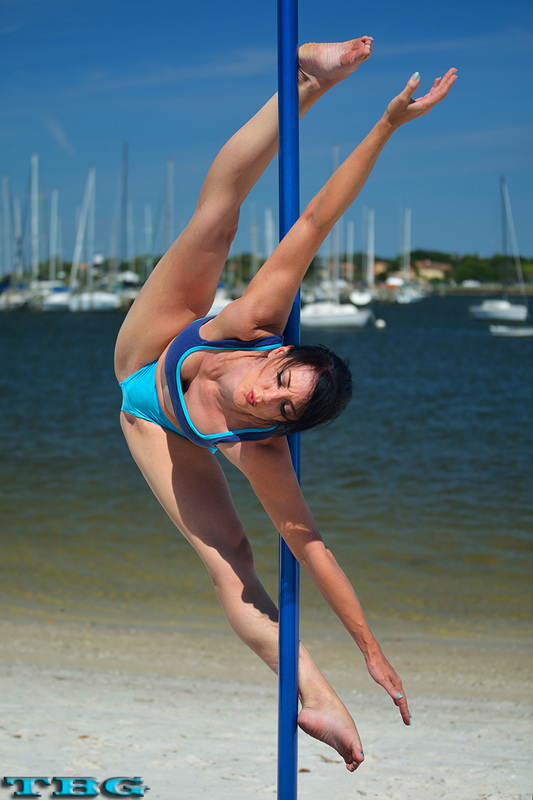 Searching for a way in

I still didn’t know how I was getting into the move either.  I looked at YouTube videos for other’s who could do it because though at this point I’d seen video of Felix doing it, the video in those spots where she’s getting into the move are unclear because of editing.  The one cuts and fades and you can only tell that she gets into it from inside leg hang.  It wasn't until I saw Maiko Star from Canada do it that I understood the mechanics of how one got into it.  There are so many videos of me trying to do it and failing because at that point I still didn't understand the mechanics of it.  Once I understood I tried it every now and then but not on video so at best those attempts can be called halfhearted.

In September 2009 I had started to try it from the floor.  The way you get into it from the floor is to bring one leg high onto the pole leaving the other foot on the floor and ducking sideways through the pole.  By December I had been doing that regularly and one night stayed in it too long.  I crashed and burned hurting my left hamstring.  I couldn’t walk right and had to rehab my leg.  It took until spring of 2010 before my hamstring wasn’t hurt any more.    I worked on it all summer by then I was able to put my feet on two blocks and put my chest all the way to the floor.  While stretching we took down the pole (husband and I) and placed it where it would be to see if I was ready yet.  On August 2, 2010 someone in class suggested I try it so I did and it worked.  After two years of trying I finally had the ultimate pole move and it was mine!  The first thing one of my students asked me was “are you going to be in the instructor showcase now?”  I really hadn’t thought of it up ‘til that point but I supposed I did have a cool move to build an entire routine on.  So that’s what I did.  The day of the show I was so nervous.  I had tried to do it the day before at the end of class but it didn’t work, I didn’t know why because I hadn’t videotaped it so I spent the entire day worried that I wouldn’t be able to get into the move.  It was so new, I only had it for two and a half months and still didn’t know for sure that I could do it every time.  I was still concerned with making sure it got into the correct position for the audience, too.

I needn't have worried about not getting into the move.  What I didn't know at the time was a neurological pathway had been cut and with my body on the pole in the correct start position, with that part of the song playing  there was no way I was not going to get into the move. I got into the move but because I had never done it in boots and with Dry Hands on the pole I got stuck in it.  It was hilarious.  You can see me go through a whole gamut of emotions from really!?? to oh snap!! and back again to really!!?? get off the pole.  I literally looked up at my foot like really? You’re really not coming off of there?  Finally I wrench my leg down and finished my routine.  The next day my leg hurt but I expected that after a performance.  When it still hurt a week later I knew I was more messed up than I originally thought.  This time though it was the right leg that needed rehab so I began to put my hips back together again.

My next performance was for the Ms. Xpose preliminary competition 4 months later.  I attempted spatchcock but was either too afraid or too hurt still and couldn't stick the move.  My friend got the best shot of it possible but I never fully stuck the move.  Everyone was very supportive and said 'well at least you didn't get stuck this time.'  I was still slowly coming back from the injury as I had lost a lot of range of motion.  I knew I was also afraid of getting hurt again and being set-back so I was really being careful not to re-injure myself.

The road to recovery


More than a year after I still wasn't quite comfortable but it was getting better.  I could admit that I was afraid of getting hurt and therefore not as able to stick the move or hold it.  Once I figured out for good how to get into the move every time (height of pole can play a huge factor) I still couldn't hold it for more than 3 seconds.  I knew it was mostly fear.  Sometimes pole slipperiness is a factor and sometimes not being high enough on the pole is as well.  Mostly though not being able to hold the move was because I wasn't keeping my top foot pointed.  Once in the move both feet must be pointed though it’s more important that the top one is pointed as flexing the top foot is how one gets out of the move from the top to bottom.  Some get out the move by unhooking their bottom foot but I have not yet figured out those mechanics.

Once I got it back for good I promised myself I would do it on my birthday every year until well into my 80s.  On my 40th birthday nothing mattered to me but being able to get into that move on my fattest pole that I own.  I learned it on that 2” diameter and now that I have moved and lost the use of my skinny pole (temporarily) I am so grateful I am still able to pull the move on the fatter diameter.

It has been 5 years since the first time I nailed that move. The truth is I probably should not have attempted to do the move that soon after getting it the first time.  I don’t care. If I had to do it over again I would do the same thing.  I would put it in that performance even though I didn’t have the level of understanding I do now. It’s part of the journey. I have gotten some beautiful shots on the beach in the move and other studio shots as well. I have explored other ways of getting into the move and don’t have the fear of it I used to have.  I tried it again in those same red boots with grip aid and almost got stuck.  Those boots may be extra sticky.  If I ever perform as wonder woman again maybe I’ll have to come up with some other red boots.  Until then I will keep on playing with varying ways to get into it and trying to get the pole lower on my back.